GR DIGITAL III x STUSSY is a modified version of the GR DIGITAL III camera that Ricoh released in August 2009. The new product is designed with special features and is to be released as a part of the commemoration in 2010 of the 30th anniversary of the establishment of US fashion brand STUSSY. It will be sold through the sales channels of STUSSY Incorporated. 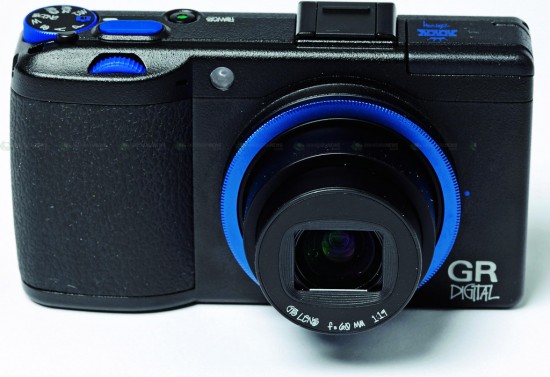 The GR DIGITAL III x STUSSY retains the performance of the GR DIGITAL III, which introduced superior image quality, and changes the color of essential parts such as the ring cap and shutter button, the area around the mode dial, etc. to royal blue, the concept color for the 30th anniversary of STUSSY. Another completely original feature is that the labels on the buttons, etc. are in the STUSSY font. The "XXX" logo marking the 30th anniversary is also displayed on the flash cover and the exit screen when the power is turned off. Therefore the new product matches functionality to design in a way that is entirely appropriate for a collaboration model.

* The features of the new camera are the same as for the GR DIGITAL III.

The GR DIGITAL III x STUSSY retains the performance of the GR DIGITAL III, which introduced superior image quality, and changes the color of essential parts such as the ring cap and shutter button, the area around the mode dial, etc.

STUSSY is a brand that originated in California and will celebrate its 30th anniversary in 2010.

In 1980 in California STUSSY founder Shawn Stussy, who had been a surfboard shaper until then, began to produce t-shirts using a surfboard logo and graphic and so the STUSSY brand was born.

Subsequently the popularity of the brand spread from the beaches to cities throughout the world such as New York, Los Angeles, London and Tokyo, etc., and now the brand is based in major cities of the world including San Francisco, Milan, etc. and offers high casual wear with a design that is basic but at the same time distinctive.

The wide range of products offered by STUSSY is popular with both men and women and among all age groups. There are mens, womens and kids lines, the GLASSES line (sunglasses), which has a reputation for high quality, STUSSY LIVIN', which supports the lifestyles of customers, and the special line STUSSY DELUXE, which is popular because it is simple and high quality.