The PowerShot G7 X is the company's first compact point-and-shoot camera with a one-inch sensor, giving users an outstanding portable camera that allows them to take high-quality photographs and videos. The PowerShot SX60 HS camera features a 65x Optical Zoom lens and amazingly broad focal length range equivalent to 21mm -1365mm, while the PowerShot N2 camera has a compact and unique, stylish design with a selfie-ready, flip-up touch panel LCD that makes it easy for social media fanatics to share their favorite photos and videos via the camera's Wi-Fi and Near Field Communications (NFC ) features. 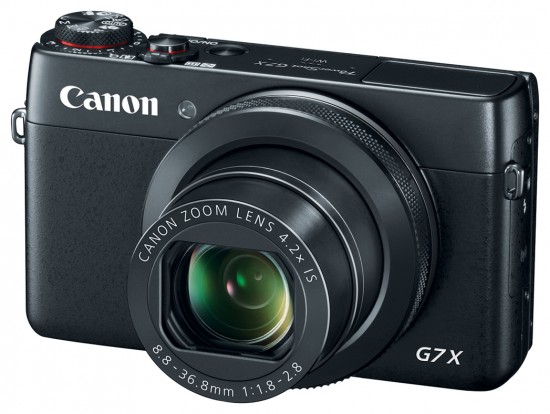 "Canon continually strives to provide imaging enthusiasts with the tools they need to create high-quality images and videos," said Yuichi Ishizuka, president and COO, Canon U.S.A., Inc. "We believe in the talent of those passionate about photography and these three new PowerShot cameras allow photographers to capture, print and share their most amazing images."

Ideal for those looking for DSLR features and quality in a compact point-and-shoot body, the PowerShot G7 X digital camera is Canon's first compact camera with a one-inch sensor. The large, one-inch, 20.2-megapixel High-Sensitivity CMOS sensor delivers optimal performance with an ISO range of 125 - 12,800. The sensor, along with Canon's exclusive DIGIC 6 Image Processor, creates Canon's high-sensitivity HS System delivering excellent low-light performance so images and videos shot are clear and sharp, helping to ensure that the finest details of the scene are preserved.

Featuring an impressive, newly developed premium quality Canon lens with 4.2x optical zoom ratio (equivalent to 24-100mm), together with a maximum aperture range of f/1.8 to f/2.8 from wide to telephoto, the PowerShot G7 X camera gives users the high level of optical performance required to capture beautiful images when shooting portraits and crisp clarity when shooting sweeping landscapes or creative macro shots. The lens features a nine-blade curved aperture diaphragm to provide beautiful, blurred backgrounds even at full-zoom range. And the camera's built-in ND filter expands the options for creative expression with stills and videos. The PowerShot G7 X camera lets users fully realize the clarity and creativity of their shots with the new multi-angle (up to 180 degrees) three-inch capacitive touch LCD panel featuring a screen resolution of 1,040K dots.

Greatly improving a photographer's ability to capture subjects in motion is the camera's High Speed AF and its 31 AF points, spread widely across the picture area to help users capture every shot with accuracy and ease. Paired with continuous shooting speeds up to 6.5 frames per second, the PowerShot G7 X camera gives users the capability to take their best shots in full resolution.

Photographers can also capture stunning Full HD video up to 1080/60p with the PowerShot G7 X camera. Accessing the various video shooting modes is easily done as the automatic and manual focus, along with the exposure settings, can be controlled using the touch panel, the dial on the back of the camera or a control ring on the lens and convenient playback on a HDTV can be done via the camera's HDMI port.

The PowerShot G7 X camera also offers multiple shooting modes giving users the power of expression. For example, the advanced Star Mode features four options to capture images of starry night skies with impeccable quality. The "Star Portrait" and "Star Nightscape" modes help capture the radiance of stars in the background while still allowing photographers to capture a foreground subject. The "Star Trails" mode turns star movement into a luminous still image, while the "Star Time-Lapse Movie" mode makes beautiful video clips that show the movement of the stars against a static background.

The PowerShot SX60 HS camera features a 65x Optical Zoom lens and amazingly broad focal length range equivalent to 21mm -1365mm, while the PowerShot N2 camera has a compact and unique, stylish design with a selfie-ready, flip-up touch panel LCD that makes it easy for social media fanatics to share their favorite photos and videos via the camera's Wi-Fi and Near Field Communications (NFC ) features.

For photograph purists, the PowerShot G7 X camera fully supports both manual exposure control and the user's choice of RAW, JPEG or RAW+JPEG recording formats. The PowerShot G7 X camera also provides excellent manual control operability with a touch panel, a programmable control ring on the lens, an exposure compensation dial, and two customizable buttons on the back in a sleek, compact body.

Like the PowerShot G7 X, the PowerShot SX60 HS camera is equipped with built-in Wi-Fi technology, so users can share the amazing still images and videos taken with the camera online quickly and easily using compatible mobile devices. The camera's Mobile Device Connect Button makes it easy for users to connect to a compatible smartphone or tablet. Images and movies uploaded to the cloud via Canon iMAGE GATEWAY can be shared easily on social media platforms. The PowerShot SX60 HS camera also includes NFC making initial setup and pairing easier with a compatible Android device.

When shooting at extreme telephoto focal lengths, the Zoom Framing Assist function remembers the user's previous zoom position, zooms out to locate the subject, and zooms right back into the saved position when the button is released. An additional feature to this Zoom Framing Assist allows users to preset a desired composition such as whole body, upper body or face. Once this feature is enabled, the PowerShot SX60 HS camera will zoom its lens automatically to maintain the desired composition even if the subject moves closer or further from the camera. Another new function called Zoom Memory makes it possible to quickly return to the most recently used zoom position, even if the battery or memory card is replaced.

The new Canon PowerShot N2 digital camera, with its stylish square shape, is packed with creative features that provide users with even more freedom to capture their most creative images. Featuring an 8x Optical Zoom lens (equivalent to 28-224mm), the camera gives users the imaging quality needed to capture great photos. The camera also houses a 16.1 megapixel CMOS image sensor and DIGIC 6 Image processor so memories are preserved and can be shared for years to come.

The sleek, distinct design of the PowerShot N2 camera features a 2.8-inch, 180 degree tilt, capacitive touch LCD screen and, in combination with the camera's new Self Portrait mode, makes this the ideal camera for taking a spontaneous selfie. The screen also allows for users to capture low-angle or difficult to shoot angles. Different from the shutter ring on the PowerShot N camera, that could be pressed on the top or bottom of the ring, the new shutter ring on the PowerShot N2 camera now functions with an all-round release, allowing users to hold the camera in various ways as well as making it a great camera choice for left or right-handed photographers.

The camera's Creative Shot mode, which was also featured on the PowerShot N camera, has been enhanced with added filters, giving users the ability to easily apply either a Retro, Monochrome, Special or Natural look to their photos. Also unique to this model, the advanced movie shooting feature in Creative Shot mode combines several movie clips automatically with special effects including super slow motion, quick motion, and various filters for creating fantastic short films. The PowerShot N2 camera also features Smart Auto Mode with 58 different pre-defined scenes for still shots and 21 for video, so no matter the shooting situation users can expect that their photo or video will be captured just as they imagined.

The PowerShot G7 X is scheduled to be available in October 2014 for an estimated retail price of $699.99.

The PowerShot SX60 HS is scheduled to be available in October 2014 for estimated retail price of $549.99.

The PowerShot N2 is scheduled to be available in December 2014 with a choice of black and white body colors for an estimated retail price of $299.99.