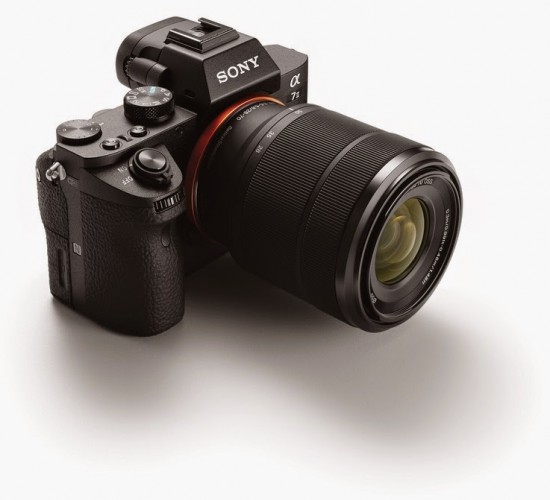 “The new α7II is simply the latest example of the impressive innovation we’re bringing to the industry, particularly in the mirrorless space” said Neal Manowitz, director of the α interchangeable lens camera business at Sony. “We’re continuing to push the boundaries of what can be accomplished with a full-frame sensor, consistently delivering ‘world’s first’ technologies that no other cameras – DSLR or otherwise – can accomplish.”

The innovative 5-axis image stabilization on the new α7II detects and corrects camera shake along five axes during shooting, including angular shake (pitch and yaw) that tends to occur with a telephoto lens, shift shake (X and Y axes) which becomes noticeable as magnification increases, and rotational shake (roll) that often affects shots at night or when recording video. The 24.3 MP full frame sensor moves to accommodate all of these types of shake, with stabilization equivalent to up to 4.5 steps faster shutter speed of correction.

The new full-frame camera shares the powerful BIONZ X image processing engine with several other high-end Sony cameras, and adds a variety of advanced video functionality including the addition of XAVC S codec, which records video at a high data rate of 50 Mbps with advanced compression for impressive video quality.

Ergonomically, compared to the original α7, the α7II model has a larger shutter button that has been moved closer to the front of the camera for optimal finger position. It is constructed with sturdy magnesium alloy on the top, front cover and internal panels for a sturdier, more solid feel in the hand, and boasts about a 40% faster start-up time compared to the α7 camera.

The new α7II camera is Wi-Fi and NFC compatible and fully functional with Sony’s PlayMemories application available for Android and iOS platforms. New accessories designed for use with the new α7II include the VG-C2EM vertical grip and LCS-ELCB soft carrying case.

Sony has also announced the development of the α A-mount Vario-Sonnar T 24-70mm F2.8 ZA SSMII and the Vario-Sonnar T 16-35mm F2.8 ZA SSMII lenses. The second generation of these acclaimed lenses will improve upon the speed of AF tracking, reduce flare and ghosting and incorporate a dust and moisture resistant design.