FUJIFILM U.S.A., Inc. today unveiled the FinePix S100FS (Film Simulation) digital camera, its most advanced SLR-styled camera to date. The FinePix S100FS provides an all-in-one solution for photo enthusiasts and advanced amateur photographers seeking the manual controls and functionality of a Digital-SLR, without the hassle and expense of additional lenses and other accessories.

The FinePix S100FS is equipped with a 14.3x Fujinon manual zoom lens, Fujifilm's 8th generation Super CCD sensor with 11 MegaPixels, RP III processor, 2.5" tiltable LCD and ISO capabilities of up to ISO 6400 at 6 MegaPixels and an incredible ISO 10,000 at 3 MegaPixels. Photographers will appreciate the ease of use afforded by Dual Image Stabilization which combines optical image and picture stabilization, and Fujifilm's acclaimed Face Detection 2.0 Technology with Automatic Red Eye Removal, while enjoying a wide dynamic range of 100-400% typically exclusive to the highest-end D-SLR cameras, and film simulation modes that only Fujifilm can provide. 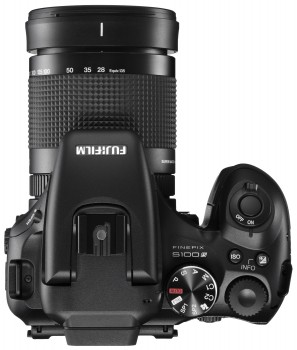 Through a unique collaboration among Fujifilm and Fujinon R&D engineers, the development team approached the design effort as a single project, creating the lens and CCD for express function as a single unit. This design allows the ultra-high precision Fujinon lens to achieve maximum resolution at all focal lengths of 28mm-400mm equivalent and aperture stop settings. Because of the composite body and lens structure, there is no penetration of dirt and dust onto the CCD of a bright F 2.8 (wide angle) or F5.3 (telephoto).

A Feature Set Borrowed From the S5 Pro

Fujifilm's engineers have incorporated some of the FinePix S5 Pro's features that have been most appreciated by professional photographers, including film simulation modes and settings that expand the camera's dynamic range. The FinePix S100FS has an extended dynamic range (100%, 200%, 400% ) that is similar to that of negative film, thanks to the newly developed 2/3" 11.1 megapixel SuperCCD VIII "HR" and the new RP Processor III. This camera prevents overexposure and underexposure, regardless of whether the subject is a landscape or a portrait, and Fujifilm's unique Film Simulation modes (FS) allow photographers to select the ideal "film" mode for the scene with a choice of four modes that optimize for portraiture, low-contrast (soft), vibrant colors (Velvia), or general use (Provia). Only Fujifilm has developed its camera technology from its photographic heritage in film which uniquely gives subtle changes in tone and color reproduction to provide the photographer the widest technical range for the best creative expression possible.

Photographers will appreciate the ease of use afforded by Dual Image Stabilization which combines optical image and picture stabilization, and Fujifilm's acclaimed Face Detection 2.0 Technology with Automatic Red Eye Removal, while enjoying a wide dynamic range of 100-400% typically exclusive to the highest-end D-SLR cameras, and film simulation modes that only Fujifilm can provide.

Fujifilm's proprietary Face Detection 2.0, featuring Automatic Red Eye Removal, debuted on the award-winning FinePix F50fd. This one-touch selectable mode enables cameras such as the FinePix S100FS to detect up to 10 human faces in a scene, correcting focus, exposure and white balance automatically as fast as 0.05 seconds to ensure that photos of human faces are clear and properly exposed, no matter where subjects are located within the frame. Fujifilm's Face Detection 2.0 has an advantage over the other face detection systems currently on the market because it can identify faces at extreme angles - even in full profile. The system allows for up to a 90 O movement in either direction for profiles and up to 135 O for leaning or lying down in either direction, for a total range of 270 O.

The Automatic Red-Eye Removal feature works in conjunction with Fujifilm's Face Detection 2.0, automatically correcting red-eye directly after the shot is taken and then saving both the original image and the corrected file. The user can then perform a side-by-side picture comparison in playback mode and select the most pleasing image.

Other noteworthy features found on the FinePix S100FS include: