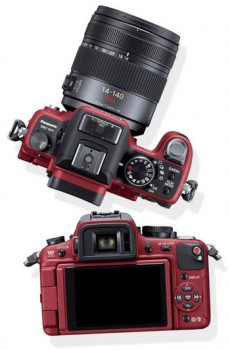 “The LUMIX FZ35 is truly unique as it includes advanced features like HD video recording, but still resembles and functions like an intuitive point-and-shoot with the ability to capture beautiful photos and video,” said David Briganti, Senior Product Manager, Imaging, Panasonic Consumer Electronics Company. “This model’s versatility makes it a great choice for a new or advanced user who wants a hybrid device that shoots high-quality still and motion images.”

For users looking for increased creativity while shooting both video and still images, the LUMIX FZ35 delivers. New manual controls and creative options, include:

- Creative Movie Mode – Allows the user to set the shutter speed and aperture manually to make even more impressive movies. Changing the shutter speed brings special effects to movies, which is especially suitable for shooting fast-moving subjects. The ability to control the aperture is convenient when there are several subjects at different distances.

- My Color Mode – This special option gives free reign to the user’s creativity. The color, brightness and saturation parameters can be freely adjusted while seeing how the adjustments affect the picture, live on the monitor.

“The LUMIX FZ35 is truly unique as it includes advanced features like HD video recording, but still resembles and functions like an intuitive point-and-shoot with the ability to capture beautiful photos and video,”

- High Dynamic Mode – Helps to capture a scene with moderate exposure even though the scene may contain both bright and dark areas.

The 12.1 mega pixel-FZ35 features the upgraded POWER Optical Image Stabilizer (O.I.S.), which allows for double the repression power compared to the conventional image stabilization system, MEGA O.I.S., and ultra high-speed Auto Focus (AF) for capturing action scenes as they happen. Additionally, with the super-powerful 18x optical zoom lens, it is easy to capture subjects that are far away or take dramatic close-ups.

With the enhanced energy-efficient image processing LSI – the Venus Engine HD* – the FZ35 has an extended battery life of approximately 470 pictures, making it the ideal choice for active photo enthusiasts. As with all Panasonic LUMIX cameras, the FZ35 features Intelligent Auto (iA) Mode, a suite of intuitive technologies including Face Detection, Intelligent Scene Selector, Intelligent Exposure and Face Recognition. With the improved Face Recognition, the FZ35 recognizes up to three faces simultaneously while taking photos** and allows users to specify the age of the registered subject. When babies under 3 years-old are registered, the camera will automatically switch to Baby mode if the baby appears to be in the frame.

The LUMIX DMC-FZ35 will have a suggested retail price of $399.99 and will be available in September 2009 in black.

*Based on a CIPA standard.

**Turn Face Recognition item ON and register the person with full-face portrait on the shooting menu in advance.