Samsung announced the pricing and U.S. retail availability of three SMART compact system cameras (CSC) with built-in Wi-Fi – the eye catching NX1000, the versatile NX210 and the top-of-the-line NX20. With SMART features, the NX1000, NX210 and NX20 can connect to wireless networks without any additional cards or devices, making it seamless to share and store photos directly from the camera.

All three new Samsung NX cameras offer exceptional image quality and are designed for users with different photographic skill levels. With a premium metallic finish, the NX20 and NX210 compact system cameras are available now from authorized Samsung retailers for manufactured suggested retail prices (MSRP) of $1,099.99 and $899.99, respectively. The sleek and compact NX1000 will be available in June in white, black and pink at an MSRP of $699.99. 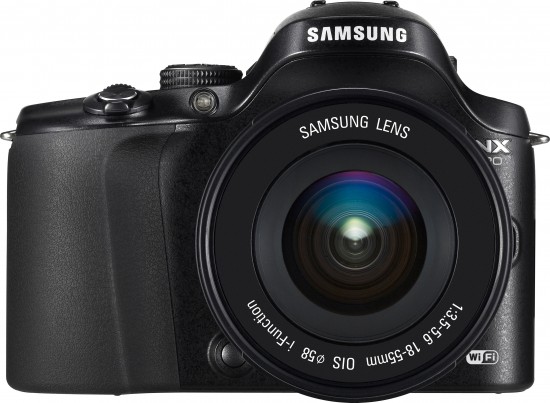 “With the expansion of the NX family, Samsung reinforces its commitment to connected creativity. Photography, at its core, is as much about sharing a special moment, as it is about capturing a stunning image and the new NX Series delivers both without compromise,” said Reid Sullivan, Senior Vice President of Digital Imaging, Samsung Electronics America. “Whether for professionals emailing photos on assignment, or a family sharing a truly unique memory, there is an NX Series camera ready to deliver.”

Channeling Samsung’s premium NX image quality, the NX1000, NX210 and NX20 cameras all feature a stunning design and a professional-grade 20.3 megapixel APS-C CMOS sensor. Ensuring the cameras benefit from Samsung’s ecosystem of imaging products, they are also compatible with Samsung’s unique i-Function 2.0 system. This innovative system enables users to control camera settings using the lens only, without having to take focus off the subject. New i-Function features include a digital crop and zoom, which allows users to focus on the most important parts of an image and crop away distracting background elements, plus the ability to add custom functions.

Coupled with the latest SMART features, the integration of Wi-Fi in the new NX models enables users to instantly upload images and video to social networking sites like Facebook, Picasa, Photobucket and YouTube, to the cloud with Microsoft® Sky Drive®, or even email them directly from the camera at the touch of a button.

Further extending the benefits of Samsung’s SMART features, the NX20, NX210 and NX1000 are compatible with Samsung’s Remote Viewfinder app, which when loaded from Google Play (formerly the Android Marketplace) onto a supported GALAXY smartphone or tablet, allows users to control settings and even take the picture from up to 30 feet away. With Samsung’s MobileLink app, users can easily transfer and display images on Samsung smartphones, tablets, or Smart TVs – turning a variety of popular devices into instant photo frames.

In addition, AllShare and the TV Link application let the new NX models connect directly to a DLNA-compatible TV to show off those amazing images on the big screen, while PC Backup can store photos on a PC without fumbling with cables.

Further extending the benefits of Samsung’s SMART features, the NX20, NX210 and NX1000 are compatible with Samsung’s Remote Viewfinder app, which when loaded from Google Play (formerly the Android Marketplace) onto a supported GALAXY smartphone or tablet, allows users to control settings and even take the picture from up to 30 feet away.

As an introduction to CSC photography, the NX1000 combines the imaging power of a professional camera with the portability of a point-and-shoot camera. The NX1000 boasts an eye-catching design and compact form-factor suitable for a small bag and a night out on the town. Bundled with an all-purpose 20-50mm lens and external flash, the NX1000 offers shutterbugs a versatile system that can help improve their photography skills, while also capturing high-quality images.

The Samsung NX1000 features a large, bright 3.0-inch LCD screen for composing images and 1080p HD video, and technologies like Smart Auto 2.0 take the guess work out of photo-taking. A dedicated Smart Link Hot Key on the top of the camera makes sharing photos via Wi-Fi as easy as pressing a button for instant sharing.

Versatile And Powerful: The NX210

Championing the successes of its predecessor, the NX200, Samsung’s NX210 camera incorporates a brilliant, 3.0-inch AMOLED screen for viewing and composing in any light – indoors or out, as well as an all-metal premium-quality body for added durability.

The new NX210 also boasts high speed capture with a 1/4000 shutter and continuous shooting capabilities up to 8 frames per second, ensuring no moment is missed. With features like Smart Panel, the NX210 brings versatility to the forefront and empowers users to push their photographic limits.

Sporting a form factor similar to a DSLR camera, yet much more compact, the Samsung NX20 is a compelling photo companion for enthusiasts and professional-level photographers looking for portability. At a fraction of the size and weight of DSLR cameras, the NX20 offers comfortable ergonomics and a convenient 3.0-inch swivel Super AMOLED screen for composing in a variety of conditions and at any angle. Additionally, the NX20 incorporates an SVGA Electronic Viewfinder (EVF) for framing and composing images. The EVF also includes a proximity sensor to detect when a user is away from the viewing area and shuts the screen off to conserve battery life.

Fitting for more advanced users, the NX20 touts a lightning-quick shutter speed, allowing users to capture images at up to 1/8000 of a second. Continuous shooting also adds to the camera’s photo prowess, as the NX20 can shoot up to 8 frames per second. Lastly, an electronic level feature helps compose images and allows users to perfectly center and adjust a tripod-mounted or handheld shot.

Creative Control At Your Fingertips

Creating artistic expressions with photography is now available for all users with minimal effort. Samsung’s Smart Auto setting analyzes, identifies and automatically selects the most appropriate of its scene modes to provide users with optimal results. From a brilliant fireworks display to a dimly-lit party environment, scene detection technology identifies the shooting conditions and automatically adjusts the settings to help achieve standout images. For users seeking more control, the Smart Panel allows them to explore their own photographic skills with Full Manual Control settings for aperture, shutter speed, flash intensity and more.

All three NX models feature Samsung’s ten exclusive Smart Filters and a new Selective Color function, which allows users to isolate a single color in an image for a dramatic effect. Additionally, the NX20, NX210 and NX1000 make it simple to capture an entire scene with the innovative Panorama and 3D Panorama features creating immersive shots of landscapes and scenery.