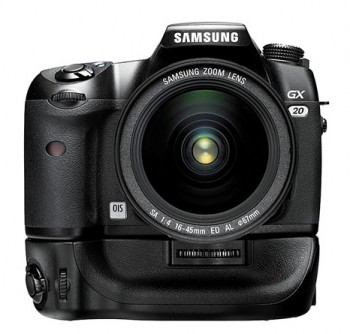 The Samsung Techwin GX-20 is equipped with the best 14.6 Mega pixel CMOS of its kind, an Optical Image Stabilization (OIS) with shaking image sensor method, a de-dusting function, and various image correction functions which enable emotive images to be captured and saved. The GX-20 is an intermediate level of DSLR camera, and may satisfy families, amateur photographers, and even professionals.

The Samsung Techwin GX-20 is equipped with the best 14.6 Mega pixel CMOS of its kind, an Optical Image Stabilization (OIS) with shaking image sensor method, a de-dusting function, and various image correction functions which enable emotive images to be captured and saved.

This CMOS image sensor has finally been developed after two years of effort, from 2006. It has the advantages of using a battery for extended time of use, with low power consumption and noise reduction at high sensitivity. Moreover, the CMOS image sensor can express clear images with high definition and excellent reliability in color by improving the amount of light received per unit area through the refinement of the circuit process. Even though Samsung encountered many obstacles when designing the CMOS, we overcame those and improved its efficiency. Samsung will show the world its technologies once again by having technologies and equipment that enable the production of the CMOS with the highest number of pixels in any camera of its kind.

For customers who want clearer pictures, the GX-20 utilizes the OIS (Optical Image Stabilization) with shaking image sensor method. The OIS quickly detects minor vibrations in the hands, and minimizes camera shake by moving the image sensor in the opposite direction of the shakes.

As the use of DSLR cameras has lately increased rapidly, shooting locations have become diversified to include mountains and seas, and so on. Customers’ requests for the prevention of dust and moisture have therefore increased. The GX-20 cameras have a specific dust- and waterproof design, on the luxury model DSLR body. 72 areas on the inside of the camera’s body, such as the shutter button, the operational button and the dial, are sealed to minimize any internal damage to the camera from hazards such as water, sand and dust.

The dual dust reduction system of the GX-20 removes any dust as much as possible by using two high technologies simultaneously, and this prevents unnecessary spots or marks on the picture. Microscopic dust cannot be adsorbed onto the image sensor itself, which has a special protective coating. Adsorbed microscopic dust is shaken off through the shaking image sensor system, and spotless clean pictures can be obtained as a result.

The GX-20 can support a high sensitivity ISO 3200 and produce optimal image quality under any circumstances through the equipped upgraded image correction technologies, such as the HDR (High Dynamic Range) function for broader expressions, by expanding the expression range of bright and dark areas. This product also provides professionals with an X sync for connection with an external flash, a one-touch RAW & JPEG conversion button and high class RAW format conversion software. Moreover, as per the customers’ requests for a large LCD, the GX-20 is equipped with a high quality, 6.86cm (2.7 inch) LCD, and shot images can be checked with more clarity and brightness. A live-view function also provides the convenience of being able to shoot subjects by directly looking at the LCD screen rather than through the viewfinder.

A Samsung Techwin employee said, “This product will satisfy everyone from professional photographers to amateur photographers with its powerful functions and high performance, and will make a breakthrough in the DSLR camera industry. Through the release of this product in early March of this year, Samsung Techwin said “we will reshuffle the worldwide DSLR camera industry to a 3-strong structure of competitors.”