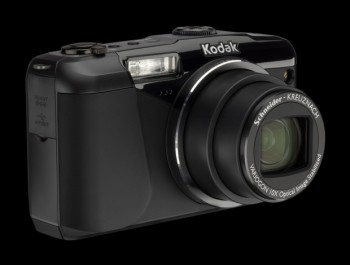 “The KODAK EASYSHARE Z950 Digital Camera enables consumers to effortlessly get brilliant shot after brilliant shot,” says Phil Scott, Worldwide Director of Marketing, Digital Capture and Devices and Vice President, Consumer Digital Group. “You can capture great pictures as you move from daytime to night and from family shots to landscapes. And the Z950 delivers all this in a compact form that makes it easy to take anywhere.”

Image quality in the new camera is enhanced by a SCHNEIDER-KREUZNACH VARIOGON Optical Zoom Lens with image stabilization. Scott notes that the precision optics of the lens integrate with the camera’s design and technology to deliver high resolution, minimum shading and low distortion.

“The combination of these features plus a 12 MP sensor makes the Z950 a compact digital capture powerhouse, with outstanding image quality and ease of use at an affordable price,” says Scott.

“Memorable moments worth capturing and sharing can pop up in an instant, and the slim design of the KODAK EASYSHARE M381 Digital Camera enables consumers to take it anywhere those moments may happen,” says Scott.

Even when the picture you want is far away, the M381 brings you closer without moving an inch, thanks to a 5X optical zoom lens. “Plus, you’ll take great pictures in just about any situation, thanks to our Smart Capture technology,” Scott adds.

The KODAK EASYSHARE M381 Digital Camera will be available in Black Olive, Light Steel Blue, and Wine Red for US$179.99 MSRP from September, 2009.